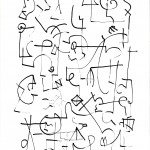 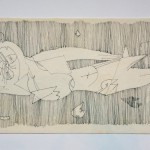 The group exhibition “Along The Lines” focused on the notion of digression in the visual realm, displaying artworks by Jochen Flinzer, Jenny Keuter, Axel Malik, and Patrick Vernon. Faint pencil traces, scribbled messages, despairing lines, stitched contours, and stretching threads will continued the reflections on digression and presented themselves in space or on paper, ranging from the elusive and emblematic to the raptures of minimalism. The works, mostly pen, thread, and print, reveal the polysemic play of wandering lines, contours, and forms.

Catalogue
Along the Lines